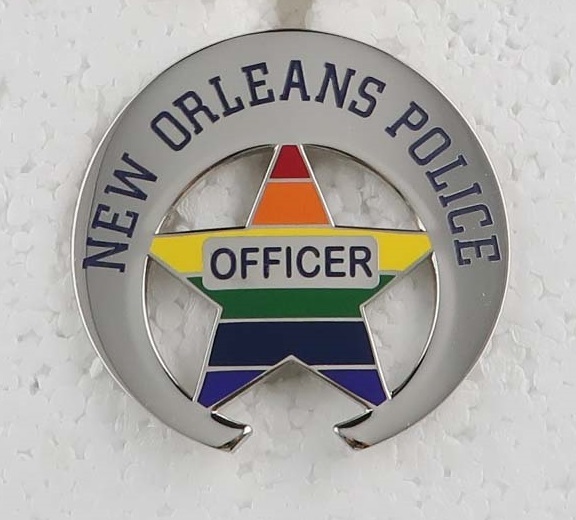 NEW ORLEANS – Citizens may see some NOPD officers wearing a slightly different badge through the coming weekend, as the special Pride edition NOPD badge will return in recognition of the 48th annual Southern Decadence.

This year’s Southern Decadence will be held August 29 through September 2, with most of the weekend’s events taking place in the French Quarter.

Commissioned NOPD officers are permitted to wear the optional badge as part of their uniform now through Sept. 2.

The NOPD was one of the only major police departments in America to allow its officers to wear these special badges earlier this year during Pride Month. It joined New Orleans EMS in making local First Responder Pride-edition badges available for use by its ranks.

NOPD Superintendent Shaun Ferguson has said that these special badges represent the NOPD’s commitment to diversity within its own ranks as well as within the community, celebrating that diversity and working with all members of the community – including its LGBTQ+ allies – to make New Orleans the greatest city in the world.

“The NOPD supports a non-discriminatory, respectful and accepting society where people of all backgrounds, lifestyles and beliefs can live, work and play together,” Ferguson said. “Utilizing these badges to help convey that support is another example of how the NOPD is leading the way in modern day policing in America.”

I have been involved with publishing and marketing since 1985. My passion is helping people share their voice. I do this through two important venues: One, with Area-Info.net where people can share everything from opinions to events to news. It is your choice! Share your story! Two, through a program called America's Real Deal I am involved with to help business owners get their voice heard. Automatically save money on more than 300,000 products. Learn more about the revv card today. Become a Content Marketing Affiliate (Learn More) Contact me directly at [email protected] to schedule speaking engagements.

Complimentary medications & medical care provided during study SACRAMENTO, Calif.–(BUSINESS WIRE)–#clinicaltrialsresearch–According to WebMD.com, “Hot flashes are the most common symptom of menopause and perimenopause.