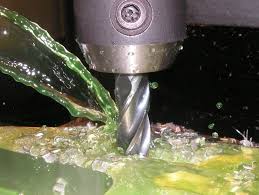 The global metalworking fluids market size is projected to reach USD 14.54 billion by 2025, as per the findings of Grand View Research, Inc., progressing at a CAGR of 4.4% during the forecast period. The market is poised to witness an upsurge in the use of metalworking fluids (MWFs) in heavy machinery and automotive applications owing to growing production of sophisticated machines and components. The market is characterized by competitive pricing strategies due to increasing number of medium- and small-scale suppliers.
Request A Sample Copy Of This Market Report @:
https://www.radiantinsights.com/research/metalworking-fluids-market/request-sample
Demand for synthetic fluids is anticipated to experience sharp rise owing to their superior properties such as excellent surface finishing and increased tool life. Mineral-based oil is a traditionally used MWF and accounted for a volume share of 46.13% in 2017. It can be produced in large quantities owing to abundant availability, easy accessibility, and cost-effectiveness.
Biobased metalworking fluids are likely to witness steady growth in Europe on account of presence of stringent government legislation. For instance, REACH, a European legislation, requires MWF manufacturers to substitute harmful chemicals such as boron, formaldehyde, and chlorinated paraffins with environment-friendly alternatives. In order to comply with the European legislation norms, manufacturers are focused on producing MWFs that are free of boron, formaldehyde, and short- & medium-chain chlorinated paraffins. However, high cost of biobased products can pose a challenge to industry growth during the forecast period.
In 2017, Asia Pacific emerged as the leading market owing to existence of a significant consumer base, primarily in China and India. Globally, production of metals such as titanium and aluminum was dominated by China in 2017. Rising production of aluminum in China, due to production capacity expansion by several manufacturers, is expected to trigger the demand for metalworking fluids over the forecast period.
Browse Full Research of This Market Report With TOC @:
https://www.radiantinsights.com/research/metalworking-fluids-market
Further key findings from the report suggest:
• The corrosion preventive oils segment was valued at USD 1,693.97 million in 2017. Corrosion preventive oils are used in machining operations where the possibility of damaging the tool is very high
• Growing production capacity in power, automobile, aerospace, and marine application segments is estimated to stimulate the demand for metalworking fluids over the forecast period. The automobile industrial end-use segment is likely to record a CAGR of 5.3% in terms of revenue over the forecast period.
• Emerging economies including Brazil, India, Russia, and China have been experiencing substantial growth in the manufacturing sector. Various exploration and production activities of crude oil carried out by petroleum companies in China are expected to play a significant role in propelling product demand.
• Key market participants including Houghton, Chevron Corporation, British Petroleum, and Exxon Mobil Corp. have a strong distribution network and customer base. Certain manufacturers such as Oelheld, Exxon Mobil, and Cimcool are engaged in offering multifunctional MWFs that are suitable for various machining applications for specific metals, which aids in increasing the savings for customers
Contact Details:
Michelle Thoras
Corporate Sales Specialist, USA
Radiant Insights, Inc
28 2nd Street, Suite 3036, San Francisco, CA 94105, United States
Phone: 1-415-349-0054
Toll Free: 1-888-202-9519
Email: [email protected]