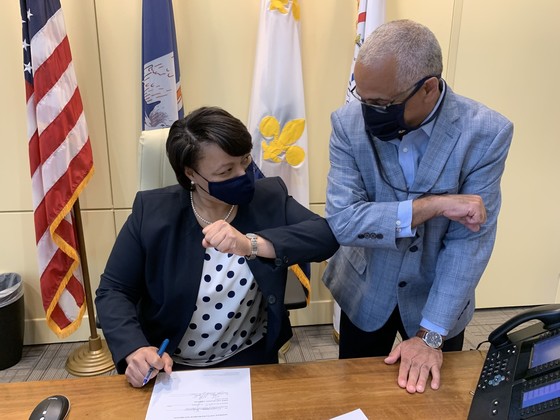 NEW ORLEANS — Today, Mayor LaToya Cantrell signed a Cooperative Endeavor Agreement (CEA) between the City and the Sewerage and Water Board of New Orleans (SWBNO) that articulates how recurring funds are collected through Mayor Cantrell’s Fair Share Initiative will be allocated.

The CEA was passed by the City Council during its regular session June 18. Read the CEA by clicking on this link.

“Last year we made a commitment to the people of the City of New Orleans that not only would we fight for their fair share of the tax revenue that they help generate to fix our aging infrastructure, but also that we would ensure that their money would be spent efficiently. This CEA reaffirms our commitment to manage our taxpayer revenue with transparency and accountability,” said Mayor Cantrell.

Mayor LaToya Cantrell, Gov. John Bel Edwards, and representatives of the hospitality industry reached the historic Fair Share Agreement for one-time funding and re-dedication of several taxes toward supporting New Orleans’ most critical infrastructure needs last year. The one time-funding ($35.6 million transferred from the New Orleans Ernest M. Morial Convention Center and State revolver loan forgiveness, as well as $16 million in State Hazard Mitigation grant funding under State/Federal review) has already been transferred to SWBNO. The recurring annual revenue of up to $26 million flows into the City’s Infrastructure Maintenance Fund (IMF) to support SWBNO projects and infrastructure work by the Department of Public Works.

Though COVID-19 has significantly decreased the recurring revenue portion, approximately $8.2 million has been collected since July 2019 from the lost penny tax. An Infrastructure Advisory Board (IAB) comprised of mayoral and gubernatorial appointees was made to support the SWBNO and provide oversight of the Fair Share dollars. The IAB, which has been meeting quarterly since September 2019, serves four major functions: